from Live Slow. Die Whenever. by The Grammar Club 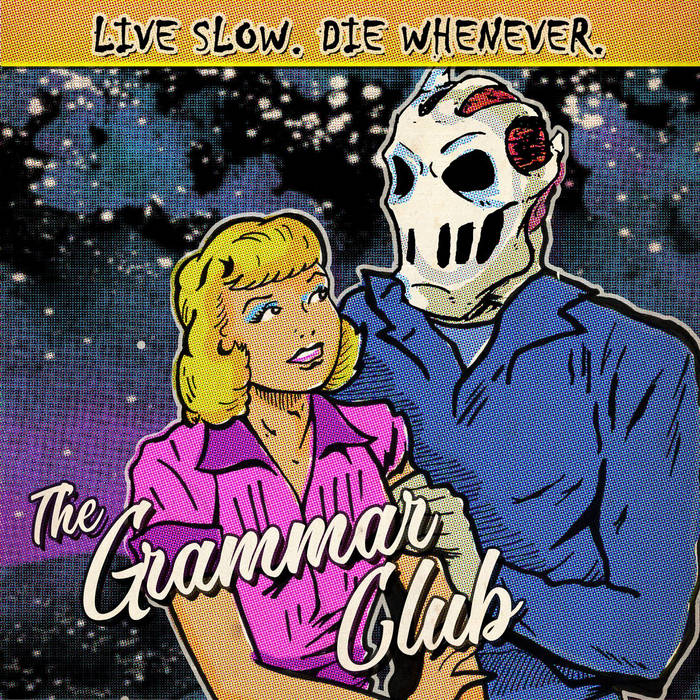 This Summer, I was doing preliminary work on a tactical brawler game with longtime friend and then-roommate Chris Motola: the other developer who worked on String Theory, my ear-training game. We were doing system design, plot writing, character and setting work, all the fun stuff that gets you jazzed about making a game until you crush your own dreams by actually sitting down to code it. That fun stuff, of course, includes music.

Largely inspired by The Foot-Fist Way, we called our game "Mall Senseis," and "Stronger Than Them All (Stronger Than the Mall)" was (is?) written to be its main theme.
I wanted to evoke the kind of metal-pop that wouldn't be out of place in a 1980s training montage, and I think I did, in my original demo. What you have here, however, is a different animal. This is the incomparable Ty Guenley's take on my original work.

Drawing on Euro Pop and Vapor Wave, Ty tapped into the latter's synergy with themes of "malls" and "the 1980s"--same thing, right?--and gave us something we lovingly referred to, during production, as "Stronger Than the Hoff."

So, there's a little biographical background. I'll expound, Dear Reader, on our production process in a future post, so as not to spoil what lies ahead....

When your fist has got a feeling
And your legs are made of fire
And you’ve done your devil’s dealing with your deepest heart’s desire
You can’t deny the eagle’s roar,
Though your heart is stone
A-hundred-thousand allies, still you need to fight alone

Been trippin
Whole time that you been sitting
Pretending it's forbidden
Life stories get rewritten, all the time
But it'll take a lot more than strong words
Baby it takes working till the whole of your soul hurts
Forwards, always keep that steady ascent
Can be yesterday's news or a current event

In the coolest air of midnight,
Where the puppet people play
In the neon of the pretzel light,
You need to stay away
For, beneath you lies a dragon
With a mighty dragon’s kiss
Oh, my momma told me there’d be troubled times like this

After years I thought the fire would die down
But I feel it burn inside of me so much I might meltdown
Push it to the limit like you don't even know how
Rise so atronomic that you can't even breath now
You're so loud, make sure that their hearing your warcry
You're so live. It's been hiding in you this whole time
My oh my, we're boltin' out of the park
Going out a legend, you're just leaving your mark
Made so many alteration they should call ya Adobe
Sweat dripping from your brow like you know that it should be
Come on!

Over and under
Lightning and thunder
I’ll pick you up from the fall
You’ve got to go for it
Nothing to show for it
Who’s there to answer the call?
Stronger than them all!/Stronger than the mall! [ambiguous]

I am them all!/I am the mall! [ambiguous]

Featuring Oakland sounds from the Smart Bomb collective and Samplelov.